A decade ago, when Facebook became popular enough for its name to become a verb, business owners and managers all became deeply concerned about the effect of the social network on worker productivity. There was much hand-wringing over how to combat this newfound scourge—domains were blocked, policies were written, and sternly worded emails were sent to the employees of the world warning them of the consequences of violating these rules. The global workforce responded in unison, saying, “Cool story, bro,” and then began using their unregulated and personal smartphones to keep on Facebooking.

When something as big and paradigm-shifting as social media becomes mainstream, there’s just no fighting it. Fast forward 10 years and many of the companies who tried to ban social media in the office are now the same ones whose marketing relies on it. Even more perfect: they now want their people using social media as advocates and ambassadors for their employers.

But there is perhaps no company that’s jumped onto the idea of employee advocacy (and social media in the workplace) with as much abandon as Sociabble. Founded in 2014, Sociabble didn’t just represent an acceptance that Facebook and others were here to stay. Instead the company leaned heavily into the idea that social is the primary way we’re all communicating now and that maybe it could actually be a valuable asset in the workplace. But they diverged from the then-small pack of solutions providing gateways for employees to their social networks; Sociabble went ahead and created a social networking platform for companies themselves. This is the real genius behind Sociabble: the understanding that if social media is good for companies then, well…companies ought to go full speed ahead on that idea.

And the companies that use Sociabble? They’re seeing results. Their website is filled with case studies (aka success stories) from companies like Toshiba, Microsoft, L’Oreal, and Mazars Group. Review aggregation sites like G2 Crowd and Featured Customers show plenty more satisfied customers singing their praises. The company itself has expanded from its headquarters in Paris into satellite offices in the U.S., U.K., and India. They currently serve 200 clients in 80 countries—with 300,000 people using Sociabble daily. After reading what the platform has to offer, you’ll likely be tempted to join those ranks.

Sociabble charges money for their service. This is a common tactic in capitalist society, and so no surprises there. They don’t publish their fees, however, as it will vary based on the size of your implementation. Your best bet is to contact someone in sales for a quote.

To refer to Sociabble as an employee advocacy platform is a bit of an understatement. Advocacy is the goal, of course, but it’s also only the beginning. That last sentence doesn’t make sense—yet. But you’ll soon see what I mean.

With advocacy being the goal, Sociabble has baked in several functions that doesn’t just reward engagement, it encourages it. I referred earlier to the platform being a social network for intranets. An intranet is the internet inside four walls, the way companies do their daily business internally. It hosts shared network drives where documents are stored, and messaging systems for instant communication, or any other use that improves the efficiency of communication and information sharing in an office. Sociabble integrates with all these resources and puts a social network style front end to them—completely customised to reflect your brand—and social networking is always more fun than intra-networking. 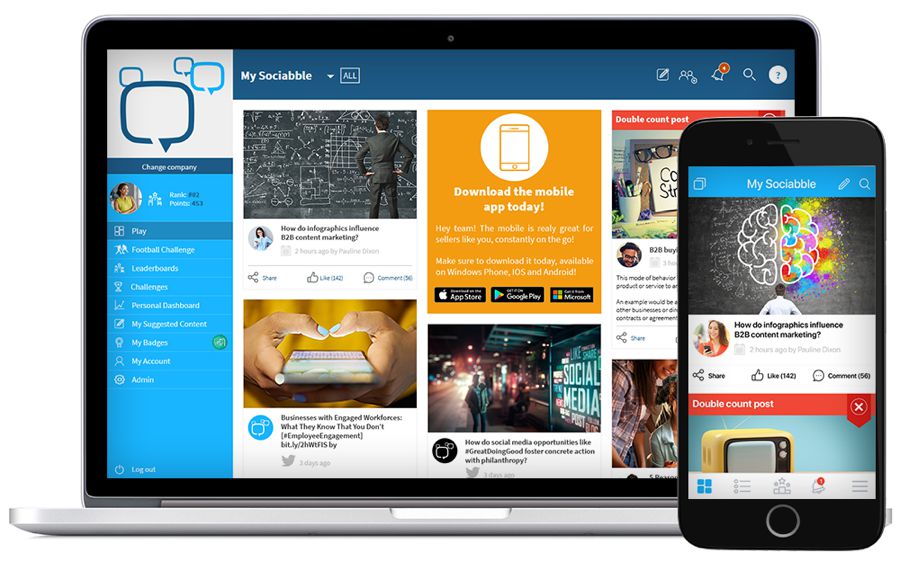 What this means in a practical sense is, If there’s a document on a network drive that you want to share with your colleagues, you can just post it to Sociabble and they’ll see it on their own feeds. And if that document is something that you’d want your employees to share to their personal social networks—maybe it’s a press release about your company’s excellent earnings in the last quarter—they can do that readily. This is a gross simplification of its abilities, but it shows how the platform goes beyond employee advocacy. In addition to Sociabble’s ability to blend right in with intranets, it also ties deeply into Office365, Yammer, Slack, and Workplace for Facebook—offering a large number of the world’s businesses a seamless experience. From top to bottom, Sociabble rethinks the way a company’s workforce interacts with one another. Couple this with the mobile app employees can use to access everything, and they’ll be inherently more apt to engage in your advocacy programs. 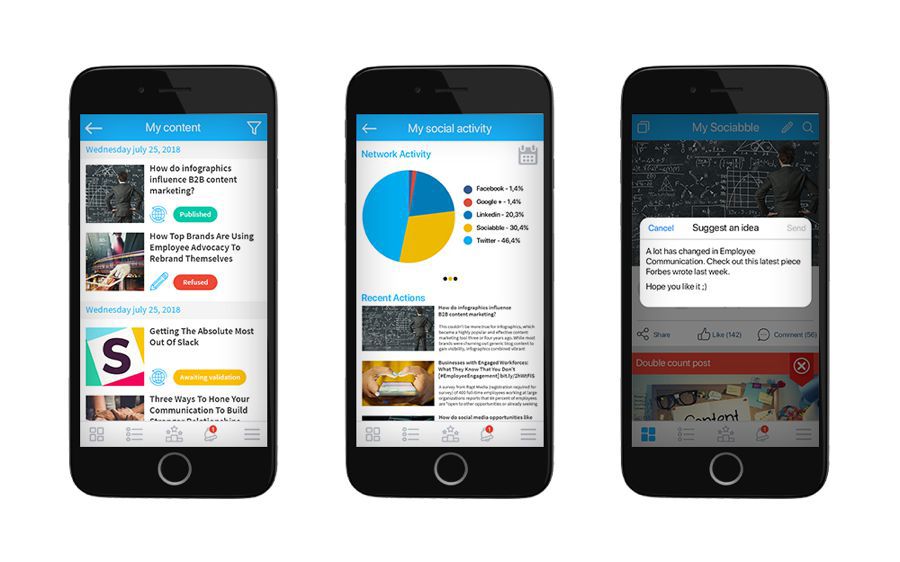 Of course, there’s more to employee advocacy than just sharing documents from the office’s network drive. Employees sharing relevant content—whether it’s curated or user generated—with the aim of promoting your business is the goal, and Sociabble gets this part very right. Again, the whole front end of the platform has the look and feel of social media: when employees create their accounts they opt into channels that interest them and their feeds will show content relevant to their interests. These can be things that the marketers in your company want to push out to the employees, or they can be posts from other employees themselves. Sociabble can also integrate with Scoop.it and Feedly to ensure that a steady stream of curated content makes its way to employee feeds. Users can like and share content internally, or share the content out on their own accounts. All of this activity can be organised into campaigns, and user performance can be tracked at the individual level: Who’s sharing what? What’s their audience engagement like? Who’s referring traffic over to your website and generating leads?

Another way in which Sociabble pushes far beyond what other EA solutions are doing is with its gamification features. Without adding any of these, Sociabble is still a platform that’s downright fun to use for an office/professional environment. There is, of course, the standard use of leaderboards to instill a bit of healthy competition in your employees. Companies can also create different badges that employees unlock through various tasks and activities. These badges aren’t limited just to activity on Sociabble, though: any accomplishment in a company can be recognized with a badge that gets displayed on their profile. Maybe the top Sales rep unlocks the Q3 Sales Badge, or someone in HR gets the Longest Lasting Hires Badge—you get the idea. The point is, even the achievements that happen in the real world, the ones that are often forgotten after the All Hands Meeting during which they were announced, get rolled onto  Sociabble. It’s a motivating factor both for employees who earn their badges—they get to see and display all their badges for as long as they’re employees—as well as for those people who want to catch up to their colleagues. 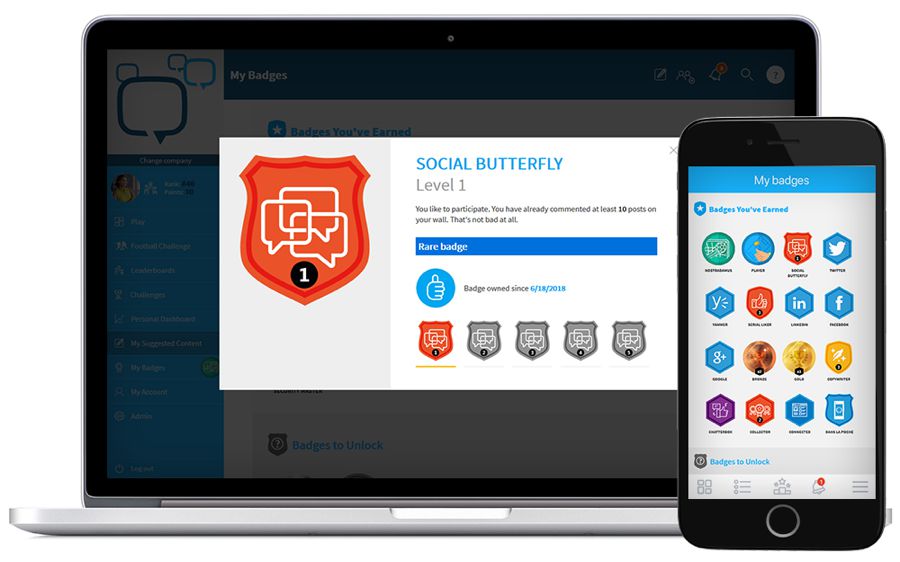 The gamification features also include challenges, which are ideal for getting employees to act more quickly with time-sensitive initiatives. If you’re closing in on the end of a fiscal year, you can motivate your sales team with a challenge that offers prizes for most sales during the last month. If you’ve gone through a rebrand and want people to visit your new website, you can challenge your employees to direct their followers to check it out. Sociabble also has quizzes and polls that employers can use to test their employees on new initiatives or solicit their feedback, activities which can also be gamified. And all of this customisable to a precise degree. Sociabble provides the framework for these kinds of activities, and companies can build off them to their hearts’ content. 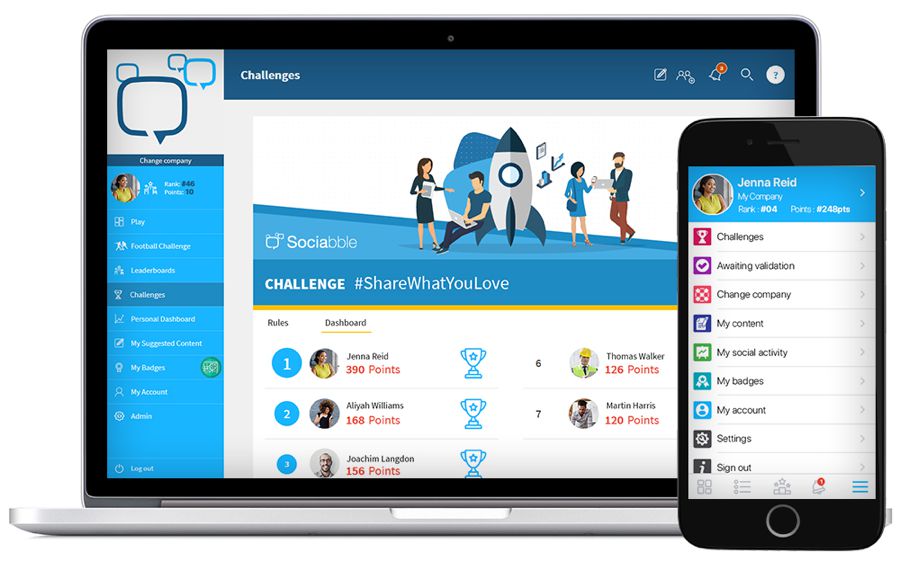 Maybe you noticed that this review doesn’t cover too many of the tehcnical aspects of implenting and measuring an employee advocacy program. That’s because it doesn’t make too much sense to waste words and your time telling you about the basics. Sociabble’s real value is in how thoughtfully it was designed, and how its developers understand the human experience as well as the marketing one.

If you’re looking for an employee advocacy platform that covers what you know you want out of doing such a thing, then Sociabble has you covered there. Honestly, though, so do most of its competitors. What sets Sociabble apart is their approach. For any kind of EA platform, success is dependent on employees actually participating, and doing so because they feel good about their job and their employer. There are many EA platforms that can take advantage of a workforce’s good will and put it to good use. But Sociabble stands alone in its ability to actually nurture that good will. Gamifying is one thing. Socia-fyng (a word I just made up) is on an entirely different level. Sociabble makes the whole process comfortable and relatable for employees, which in turn pokes them into action.

This isn’t to say that if you buy into Sociabble you’re guaranteed a loyal workforce that wants to advocate for your brand. As with any marketing initiative, you get out what you put in. You have to know what will work and what won’t with your business. Rest assured, though, that if you know what works—Sociabble gives you the tools to go further than you would have thought.

What is Behavioral Targeting   ?