At first glance, Collabary’s unlikely history is a strange one. Without doing any research at all, I feel comfortable saying it’s the only influencer marketing platform that started out as an online retailer of footwear. I mean, it’s not a direct line from foot width to bandwidth; Collabary is an offering of Zalando Marketing Services (ZMS), a company that’s an offshoot of Zalando—the European fashion and e-commerce giant. But way back in 2008, when Zolando was founded, the focus was shoes.

By 2015, Zalando grew big enough that their marketing department wasn’t just working to drive traffic to the site; they also worked with many of the brands whose products they sold, crafting data-driven campaigns—with and without influencers—and promotions to boost sales. The success of this necessitated the creation of Zalando Marketing Services. The software they built to manage their influencer marketing efforts in-house is the foundation of Collabary. Knowing all this, the path from shoe sales to a Saas marketing platform seems almost inevitable

By the time Collabary was launched, Zalando was already well versed in analytics for both e-commerce and marketing purposes. They were also sitting on eight years of data for both purposes, and knew how to use it. That’s an enviable position for marketing platform to be in on launch day. Moreso than any platform we’ve looked at, Collabary really drills down into the nuts-and-bolts of a brand’s spending and returns, breaking down exactly what they’re getting for their influencer budget. The e-commerce part of its DNA shows itself around all over the platform, like an anxious accountant who’s constantly reminding you of the financial implications of your decisions.

That attention to the fiscal details exists side by side with Collabary’s philosophy that influencer marketing is mostly about relationships. For it to truly be successful, you have to invest time in connecting with the right influencers so they will work with you and not for you. While that’s not a new idea for influencer marketing, ZMS had years of experience on how that works when they built Collabary. Meaning: they built something based on their experience, not their ideas.

It probably surprised no one when longtime Zalando partners—Nike, Levi’s, Diesel, Vans, and Timberland to name a few—signed up when Collabary finished its beta testing and went live. Such is the power of relationships. What’s key here is not that these brands adopted the platform. Rather, it’s that they continue to. Relationships are a good enough reason to start something, but with marketing it’s the results that matter. Collabary appears to be good at both.

Collabary is offered as either self- or managed service. This review covers the self-service offering, for obvious reasons. It is worth mentioning, though, and understanding the differences:

When you first log in to Collabary and poke around the interface to check it out, you’ll easily acclimate to the environment and see all its core functions: influencer discovery, content curation, campaign management, and analytics. It actually has all the hallmarks of an influencer marketplace, though it certainly isn’t that.

The first key difference to dispel the marketplace notion is in the pool of influencers you can find from the platform. Marketplaces are closed affairs; you’re only searching through the profiles of creators who’ve signed on to the platform. And, yes: creators will have to sign up for Collabary in order to participate in campaigns and get paid, but they don’t need to be on the platform for you to find them. The talent pool is divided in two: There are 5,000 verified influencers who are on the platform, have been thoroughly vetted by Collabary, and have shown they deliver results. It’s akin to having a talent agency at your fingertips. The second pool is one I’ll call “Everyone Else.” There are 175,000 Instagram accounts indexed in Collabary, all brought in through the platforms web-scraping algorithm, and all meeting certain minimum requirements: at least 5,000 followers and .5% engagement rate, in one of the 17 European countries Zalando serves, and their content must pass a quality check. Expand your search to include them and then invite them on to the platform to work with you. 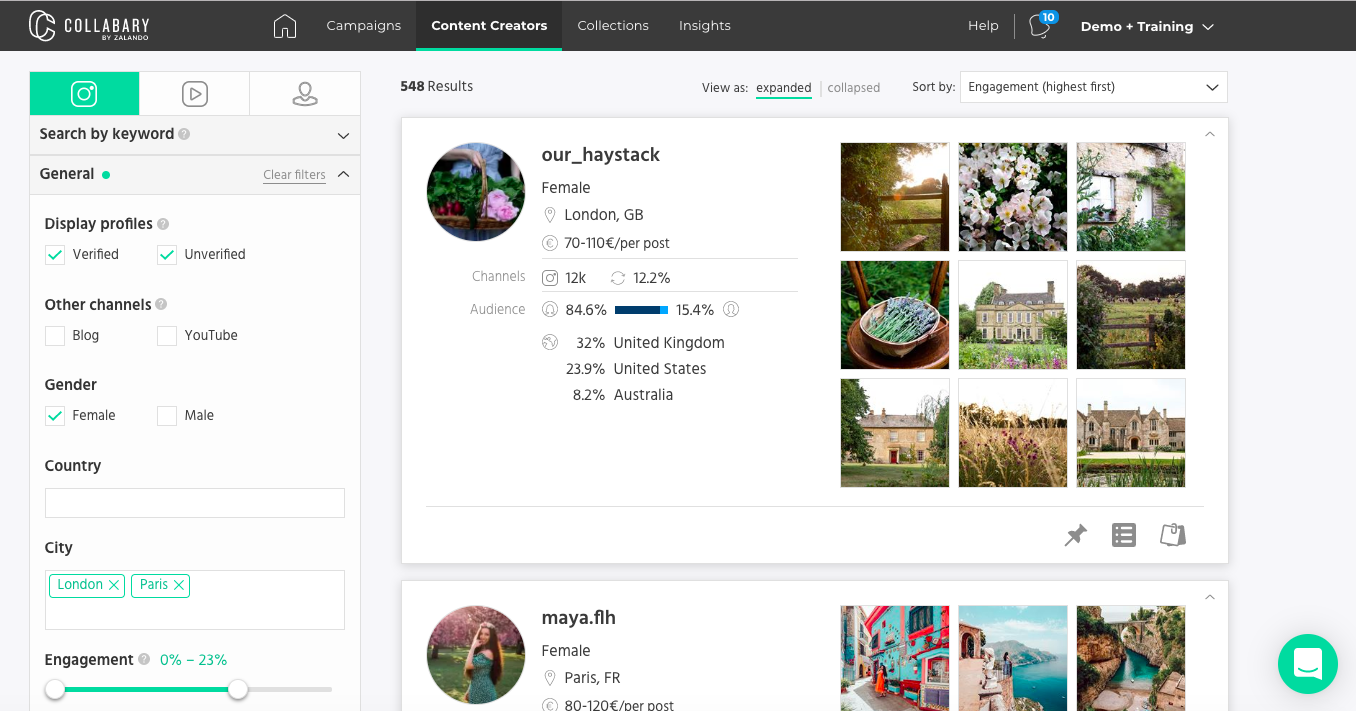 Like many discovery tools, you can organize potential influencers into collections. Unlike many other tools, though, Collabary turns those collections into real business insights. The platform assigns a cost to each influencer, a suggestion of how much to pay them per post based on their performance metrics. When you organise several of them into a collection, Collabary puts all their information together and shows you what a campaign might look like with this group of people: total reach, the average engagement rate, what their audiences look like, what their audiences are interested in. And, more useful than just an estimate of what it would cost to work with all of them, you’ll see stats on the group’s average cost per mille and cost per engagement. This kind of information up front is invaluable. 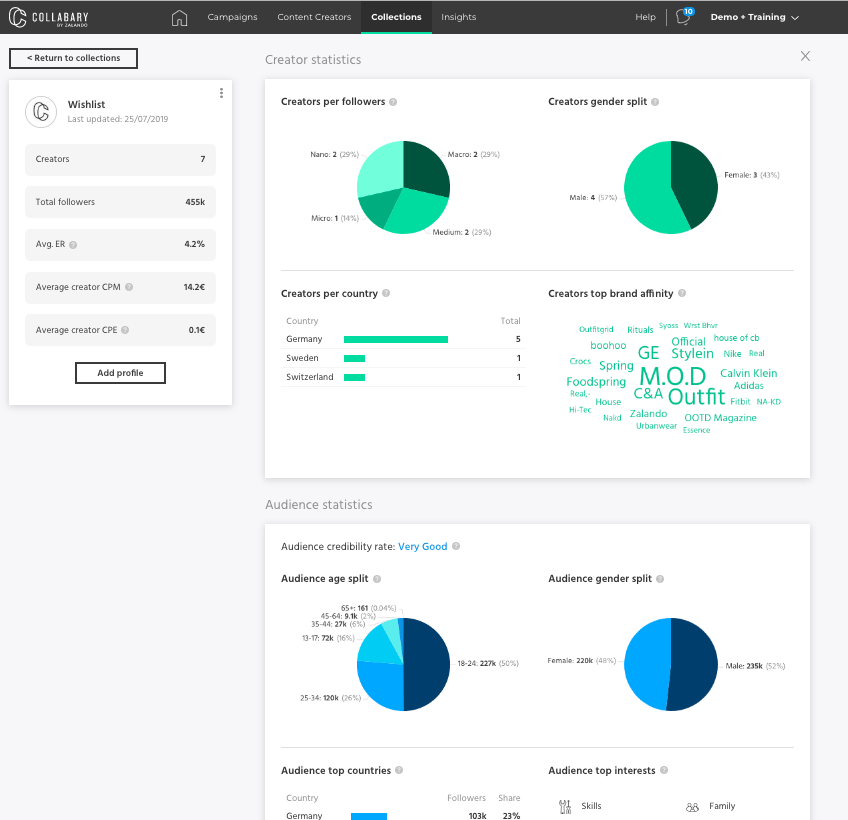 Once you’re in campaign mode, the marketing experience of Collabary’s creators becomes very evident. Campaign creation functions much as you’d expect—create a brief, set a budget, upload collateral, set a timeframe, create guidelines—but once you start inviting influencers the software does a great job of keeping all the information you’ll need readily accessible to all members of the team. As its name would suggest, this is very much a collaboration tool, designed to streamline all information and communication into one place. A list of each invited influencer along with their status (Pending, Accepted, Declined) keeps everyone up to date; if someone is listed as pending, you can drill down into their profile to see exactly where in the process they are. 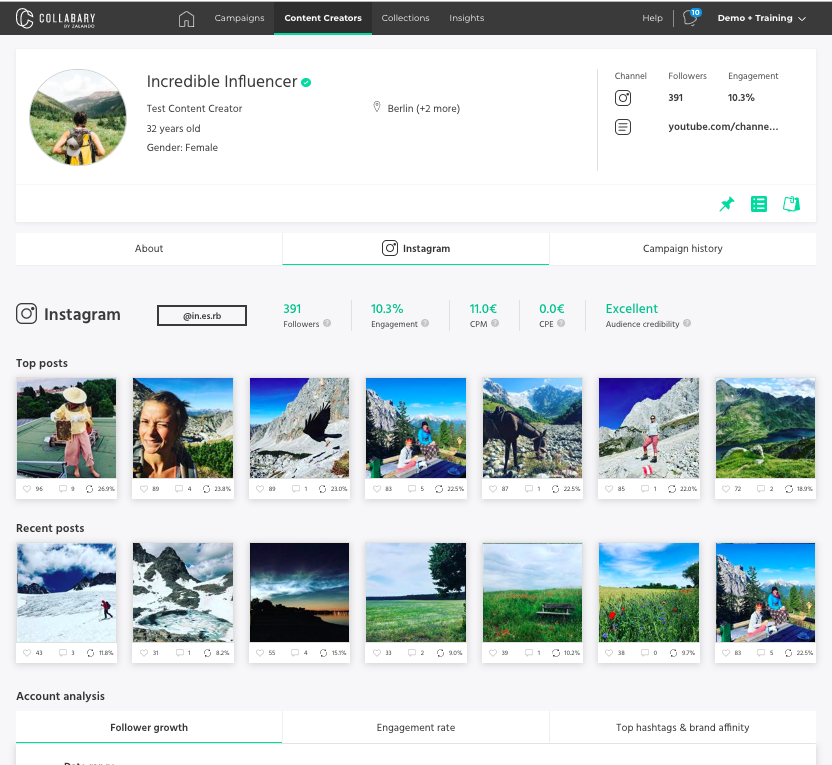 Payments to influencers are also streamlined. Instead of having to handle all payments individually, brands receive a monthly invoice aggregating all payments due. While this is a nice timesaver, it does lead me to my one complaint about Collabary—and that’s the 9% service fee for payments. I’ve said it in other reviews, and I’ll say it here: it simply doesn’t cost that much to move money. And since this payment setup is offered as a standard part of a service—meaning there’s no choice but to use it—it’s a cost of doing business. That cost should be factored into the subscription price.

Finally, and it should go without saying, that Collabary offers top-notch analytics, both as a way to understand how your campaigns did and as a research tool. Post-campaign analytics offer all the insights you’d expect, with an emphasis on money spent and ROI. You can start at a top-level performance overview, and then drill down into every participant and see with remarkable specificity how well (or poorly) each influencer did. 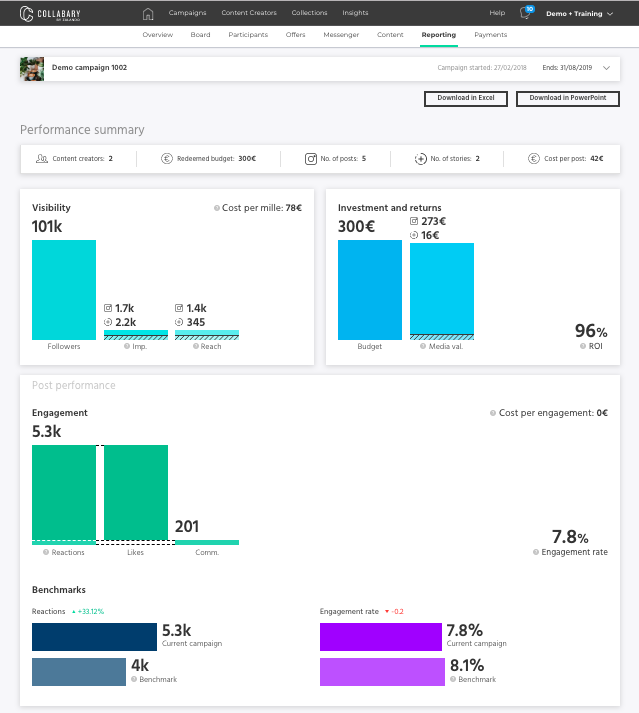 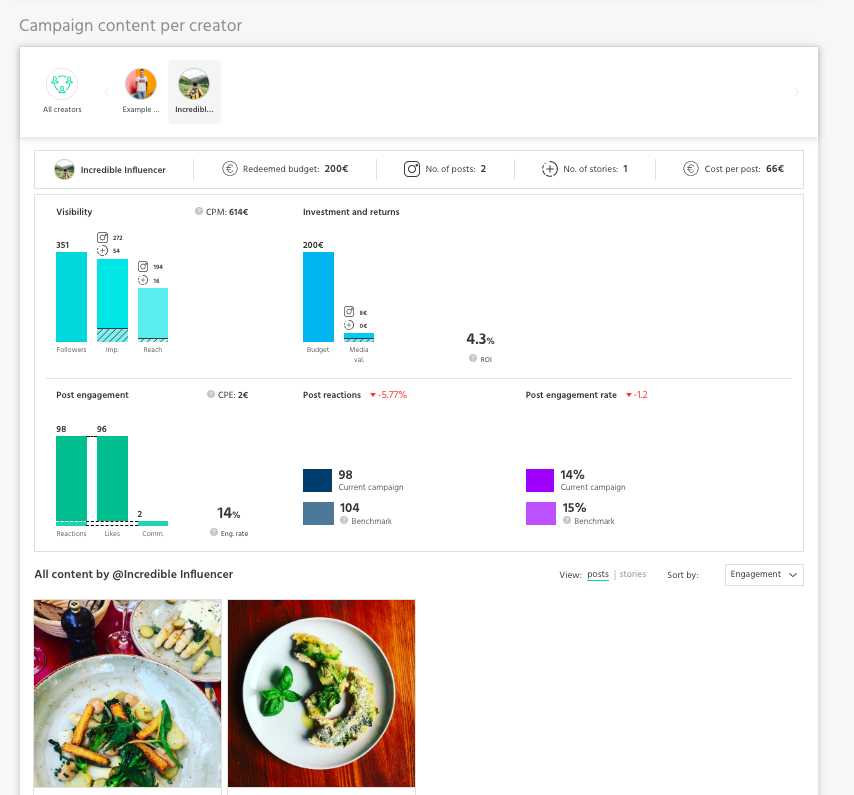 There’s also a Share of Voice report, which you can use to compare your social accounts performance against competitors, This can be done ahead of a campaign, as a way of seeing how your past posts have fared and how it impacted your share compared to the competition. By filtering down to specific dates that correspond to campaigns, you’ll get an accurate reflection of how much impact your campaign actually had on the social conversations happening around your product or vertical. 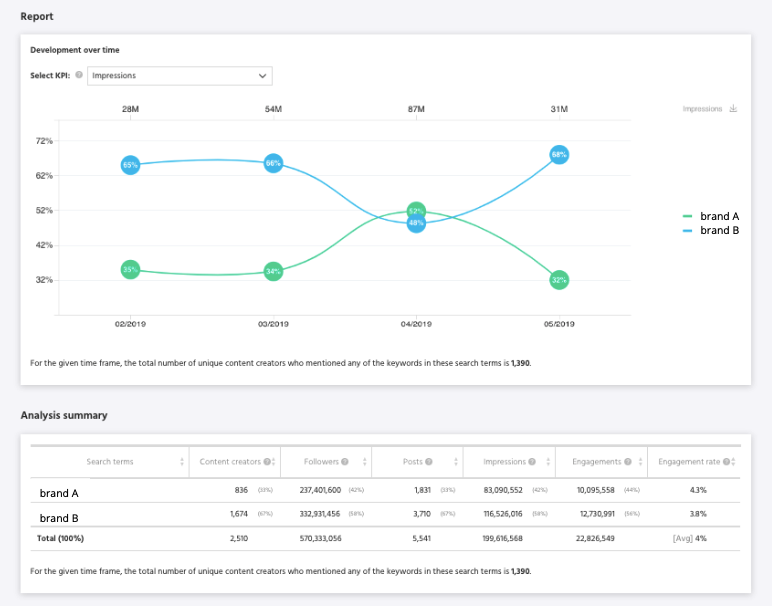 This is a good place to state that there’s a lot of ground this review didn’t cover. I didn’t get that deep into the search tool for finding influencers, or at all into the on-platform messaging feature that keeps all communications a matter of record for your entire team. Exporting reports, making notes on creators, content curation, the approval/denial process for campaign content—they’re all there, and they all perform to or exceed expectations. Instead, I focused on some of the truly unique things about Collabary: features or insights you won’t get anywhere else (or, if you can, they aren’t done as expertly as the Zalando team did here).

Collabary launched in beta back in 2016, with tools for finding influencers (mostly the ones they’d already worked with through Zalando’s internal marketing). There wasn’t much else at that point, with brands having to use email and other external tools to manage relationships and campaigns. This post at earlymoves.com announced the beta, along with the caveat, “Collabary has a very low tech approach at this time.” In less than 3 years, they’ve transformed the platform into something that is decidedly NOT low tech. Instead, it looks like a lot like a mature product that’s been around for a decade—which is about how long Zalando has been innovating the fashion/e-commerce space in Europe. And now they’re doing the same with influencer marketing.

How to Create a LinkedIn Company Page in 7 Easy Steps