You are watching: Byte Statistics and Facts – Is There Any Potential? In Lisbdnet.com

Byte or Vine 2.0, as some people are calling it, is a short-form video creation and sharing app. It lets you create six-second long videos that loop.

The app was launched in January 2020 and was made available for both iOS and Android devices. It is being called a revamp of the previous app designed by Vine app’s creator Dom Hofmann, Vine. Vine was sold to Twitter in 2012 and eventually shut down in late 2016. The app was very popular among youngsters and Byte aims to piggyback on that popularity.

In this post, we will learn all about Byte, what it does, its success so far, and how it differs from other similar apps.

Byte, being developed by the same person, does draw some similarities from Vine. It is based on the same short-form, looping video format as Vine.

However, one main difference (advantage) is that it provides monetisation options for creators, right from the beginning. The app has a focus on proving payment options to top creators even it that means taking it out from the app’s funding.

This provides a big advantage to Byte as social media influencers from other platforms can join and start earning from this app very quickly.

Here are some of the things that make Byte unique:

Byte also has a creator program that allows different influencers to connect and learn about the app’s features and updates before anyone else. This shows a clear focus on enabling creators to do their best on the platform.

Things like these will go a long way in making Byte take off and reach similar levels as other popular apps like TikTok.

Byte is also experimenting with an 8-second video format to test how it is received by the app’s users. The app’s April 2020 update launched this new format, giving users the option to create slightly longer videos than they did earlier.

Byte is trying its best to stand out from the crowd by introducing unique and innovative features to embellish the videos created on the platform.

One such feature is Floaties, which was launched in March 2020. Floaties are floating text or images that you can add to your videos. These will appear like floating 3D objects in your environment when you make a video.

Another feature is Byte Beats, which allows you to add perfectly looping audio tracks to your videos. The app will automatically stretch or shorten this audio track depending on your Byte length. As of April 2020, this feature is only available for the iOS app, but will soon be launched for the Android app as well.

Byte has a Community Forum where the staff members can share updates and app users can ask questions and discuss topics. The interface is very similar to other online communities, with different threads and replies on each thread.

Vine Versus TikTok – Which Has More Potential?

Vine may have ruled as a short-form video sharing app at its peak, but in 2020 that position is already occupied by TikTok.

As of January 2020, TikTok has over 800 million active monthly users. In November 2019, TikTok crossed the threshold of 1.5 billion downloads.

Now that is the TikTok benchmark that Byte has to beat. And, given its initial launch success, it is a good possibility.

However, popularity aside, there are other reasons why Byte will have to face TikTok head-on if it wants to succeed. The main reason is that these both have the same target audience. Both the apps target the younger generations as they comprise their main user base.

Byte is similar to TikTok in many ways but it will have to give TikTok users enough reasons to switch to its platform or even try it. Byte has been one step ahead on this front and already has a strong value proposition, especially for influencers and creators.

Byte plans to pay its top content creators via a revenue-sharing model once they start advertising on the platform. Every month they come up with a pool of money that they will distribute to the top 100 creators. Byte has launched a partner program where creators with the highest number of views will be paid.

They announced the first reward pool in April 2020. 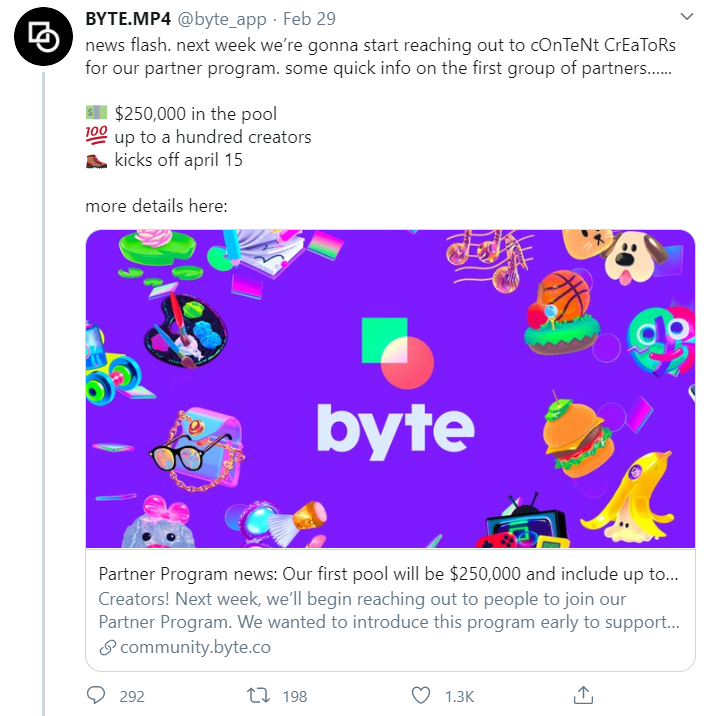 So, monetisation options are the biggest weapon in Byte’s arsenal right now to attract creators to the platform. But, there are other ways in which Byte can differentiate itself from TikTok and create a unique position for itself. Let’s see what these aspects are.

One major difference between TikTok and Byte is the length of videos that these apps support. TikTok, which initially started with 15-second videos, now allows users to create videos up to 60 seconds.

Byte, on the other hand, allows with 6-second or 8-second looping videos. This gives it a chance to create its own user base of people interested in ultra-short videos.

Most people use TikTok to make lip-syncing videos where they recreate a popular scene from a movie or show. Sometimes it is not enough to do that in 15 seconds, which is probably why TikTok increased the video length to 60 seconds. But, it is not limited to that and allows lots of flexibility and creativity on the kind of content that can be created.

Byte, similar to its predecessor Vine, focusses on funny looping videos of very short length. The app is still new and creators are coming up with innovative ways to use this ultra-short format.

However, for now, TikTok remains more versatile in terms of the kind of content that can be created on the platform.

TikTok is most popular in Asian countries like India and China that account for a majority of the app’s downloads. Byte, on the other hand, will focus more on the US market and other western nations.

Overall, Byte has a lot of strong points that it can capitalise on but there is still a long way to go, especially if it wants to dethrone a popular app like TikTok.

Though it has only been a few months since the launch of Byte in January 2020, there are still some noteworthy statistics available. These are not extensive as the amount of information on Byte is still very limited. But, it is enough to show that this app has potential.

Let’s take a look at some of the primary statistics available for the app. As more information is available, we will update you with more detailed statistics

This shows the huge potential of the app, despite facing competition from already established apps like TikTok.

2. The US accounted for 70% of Byte downloads in the first week.

Of the 1.3 million downloads, 912K were from the US alone. This means that the former Vine fans from the US were the first ones to try this new app.

3. Great Britain  and Canada are second and third, respectively, in terms of the number of downloads.

7% of the app installs in the first week were from Great Britain while 6% were from Canada.

4. Byte beat Vine and TikTok in the number of downloads in the first week.

Byte got 1.3 million downloads compared to 775K downloads that Vine got in its first week after launch. 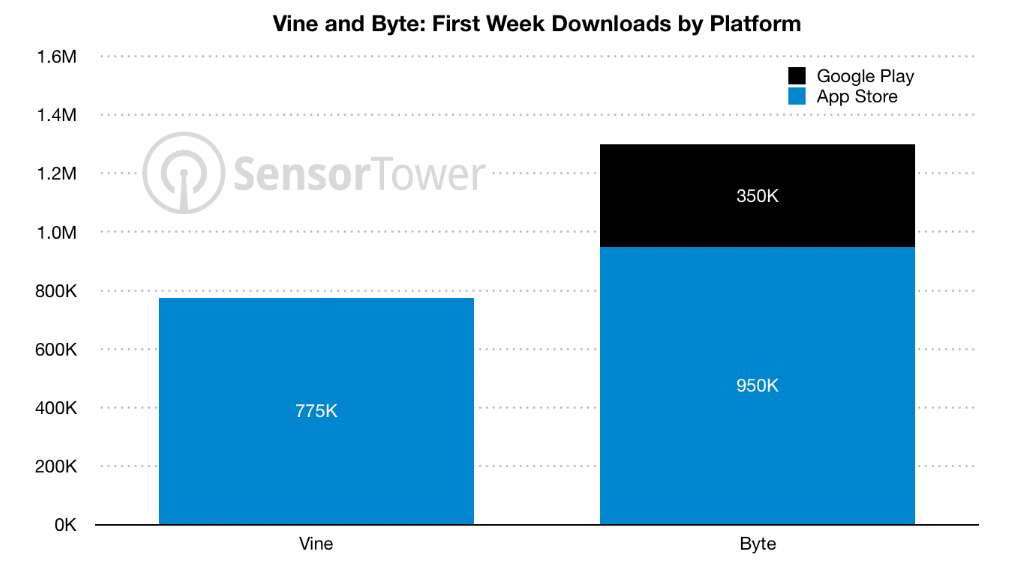 This also beats the download numbers for Musical.ly, the former name of TikTok, when it was first launched. It got only 8,800 downloads in the entire month after its launch.

How to Use Byte

You can use Byte to watch, create, and share short-looping-videos.

When you open the app, it will show your feed of videos from the accounts that you follow. You can scroll down and watch videos, just like you do on any other app like TikTok and Instagram.

The interface is colourful and userfriendly. This is how it looks.

Byte is currently riding on the popularity of its predecessor, Vine, which had a huge fan following. However, to differentiate itself from competitors and make a mark, it will have to come up with new and innovative features.

There are already a few apps based on a similar concept like TikTok, Dubsmash, and Lasso (by Facebook). TikTok has been ruling the market and even a giant like Facebook could not compete with it by launching Lasso.

Only time will tell how well Byte will do and whether it will ever reach TikTok’s popularity level. However, its early monetisation options for creators and the Vine legacy will help provide it with a strong push ahead.