Instagram is the top social media channel for influencer marketing and is a favourite among both brands and influencers. Especially with the rapid growth of the platform over the past five years, Instagram influencers are becoming even more popular and valued. There are a ton of influencers on the platform now, spanning across a wide variety of niches and interest areas.

These influencers are often creative, inspirational, and fun to watch. They create valuable and/or entertaining content that engages their audiences, which is exactly how they became influential in the first place.

Alex Moe is a Starbucks barista with over 500,000 followers on Instagram, and there’s a good reason for this massive following. He creates his own macro-friendly versions of Starbucks drinks with slight twists. And he uses Instagram to share tips on how his followers can order these drinks at any Starbucks.

With 2 million followers, Adam Gallagher is one of the most influential people on Instagram. His main focus is on style and his feed is filled with pictures of his classy, minimalist looks. His followers look to him for trend forecasts and outfit ideas. He was even given the “Best Men’s Fashion Blog” award by Bloglovin.

Eugene Lee Yang became famous through BuzzFeed, where he worked as a producer and was featured in many of their videos. He’s one of the Try Guys – a group that was formed through BuzzFeed and has since started an independent channel with 5.8 million subscribers. Eugene is mostly loved for his sassy sense of humour and colourful personality. He has gained 1.9 million followers on Instagram, where he mostly creates fashion and entertainment content.

Nick Wooster is living proof that fashion isn’t about age. This 58-year-old fashion consultant is known for his sharp sense of style and his tattoos. He has worked with notable brands in the fashion industry including Polo Ralph Lauren and Neiman Marcus. He has managed to build a significant Instagram following of over 700,000.

If you’re into food, you’ll love this next influencer. Nick calls himself, “Dad Beets,” and he is a food influencer who regularly posts delectable food photos on his Instagram. He captures photos of his own preparations and food served at his favourite restaurants along with personal narratives and tips. He has garnered over 68,000 followers on the platform and has even won the SAVEUR Blog Award for Best Food Instagram.

Gaz Oakley is a food influencer from Wales, and is mostly known for his vegan recipes. He currently has 317,000 followers on Instagram, where he shares pictures of his delicious vegan dishes. Gaz wants to put a vegan twist on popular dishes like mac and cheese, which has helped him win over his followers. He shares the full recipes on YouTube, where he has 623,000 subscribers and then uses Instagram to promote the links.

Clean and organised are the words that would define this influencer’s Instagram feed. Phil Cohen is an art director and style influencer with 743,000 followers. Rather than posing with his outfits, he arranges them in a very organised fashion as you can see in the screenshot below. He has even been nominated for a Shorty Award in fashion back in 2017. Phil has partnered with fashion brands like Mango, Todd Snyder, and Life After Denim. 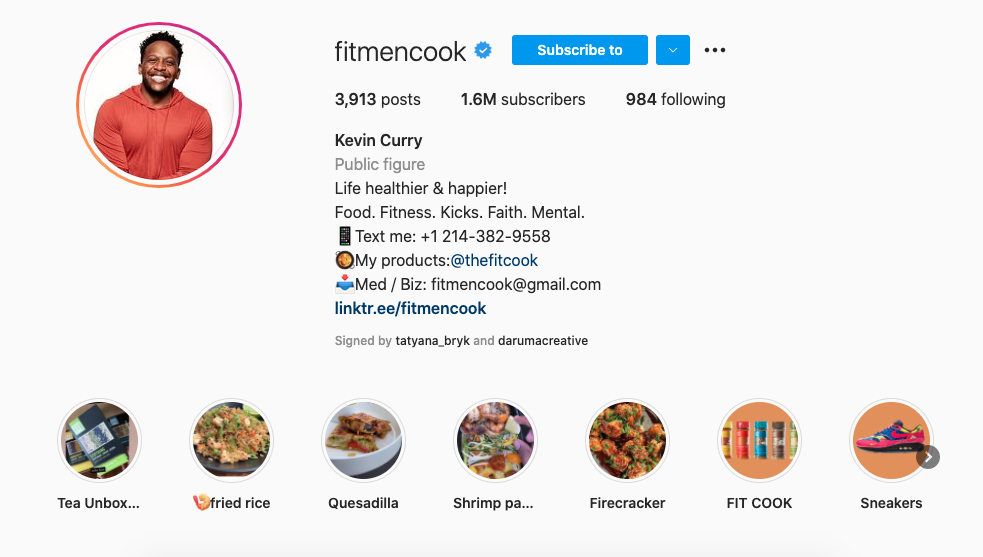 Kevin Curry is one of the top food influencers on Instagram, having garnered 1.4 million followers on the platform. His feed is dedicated to sharing healthy recipes that complement his fitness routine. What makes him different is that he caters to both English-speakers and Spanish-speakers by writing his captions in both languages. This has played a huge role in expanding his following since he caters to a larger audience. 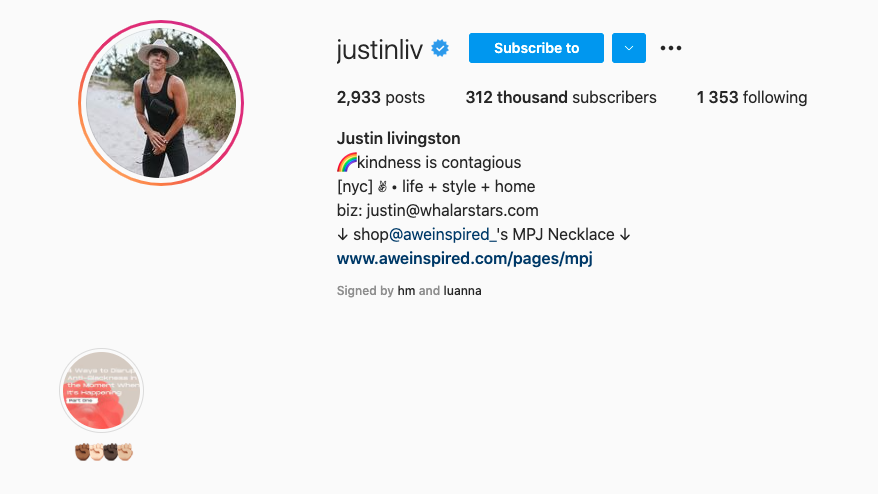 Justin Livingston is a fashion and lifestyle influencer from New York, who’s the mind behind Scout Sixteen, a lifestyle and travel blog. His Instagram feed features his latest looks and style forecasts and he has amassed 330,000 followers on the platform. Justin’s influence and his eye for aesthetics have landed him partnerships with big brands like H&M, Nivea, and Dunkin’ Donuts.

Brian Kelly is the founder and CEO of The Points Guy, a travel website that provides insider tips on travel, aviation, and earning points. He reviews and shares his travel experiences through his personal account, where he has 218,000 followers. His brand account also shares reviews and tips from other team members. He even launched a dedicated website that caters to a British audience called The Points Guy UK, which currently has 11,800 followers on Instagram.

This English makeup artist originally built his influence through YouTube, where he has 3.5 million subscribers. He has also established himself as a beauty and makeup influencer on Instagram, where he currently has 680,000 followers. Using his 15 years of experience in makeup, he shares tutorials and honest reviews, which has earned him a loyal following. He even has his own line of makeup brushes. 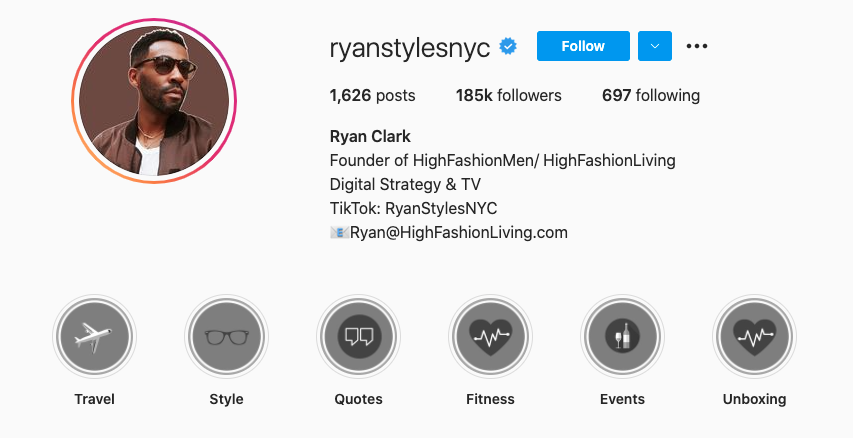 Another New-York-based style influencer on the list, Ryan Clark is the founder of High Fashion Living, a men’s style blog. He has 167,000 followers on Instagram, where he mostly creates content on fashion and lifestyle. This influencer is known for his sharp, clean-cut suits and effortless style. He has even landed partnerships with brands like Dunkin’ Donuts, MOTILE, and Volvo.

Quin Schrock is one of the best adventure photographers on Instagram right now. Based in Oahu and Southern California, this influencer has been an adventurer at heart, even as a kid. He takes breathtaking images of travel destinations around the world including Australia, Mexico, and the Philippines. These photos have helped him build a massive following of 936,000 on Instagram. His host of clients include top brands like GoPro, Sony, Apple, Adobe, and Nintendo.

Before his Instagram fame, James Duigan had already built his name as a world-renowned wellness guru. He is the owner of Bodyism, a London-based health and fitness facility. He has also authored a series of books on the, “Clean and Lean Diet.”

On Instagram, James currently has 66,300 followers. While he mostly shares his personal and family life there, he also provides his followers with wellness tips and shares motivational quotes. 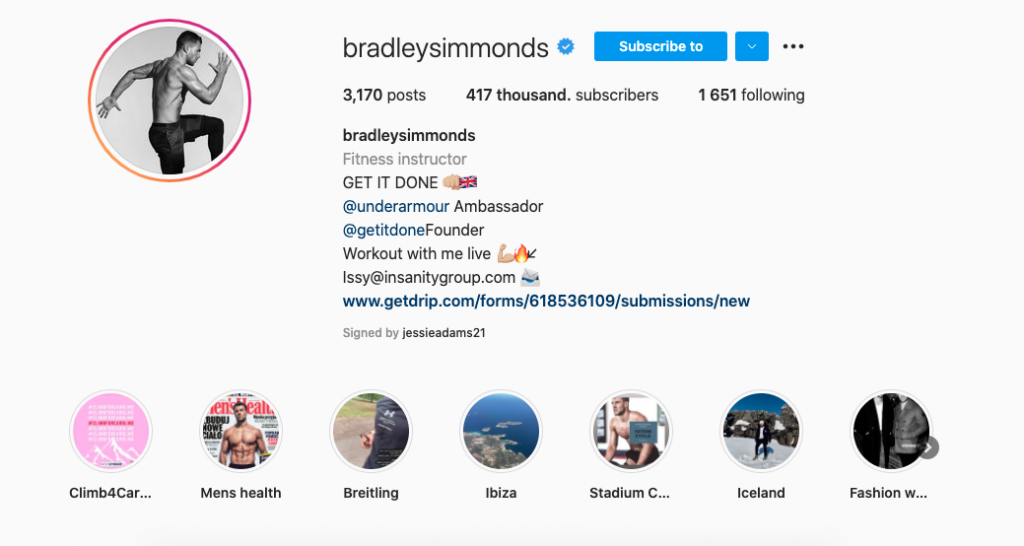 Bradley Simmonds is a fitness influencer based on London. As young as he may be, this 24-year-old has built a name for himself in the world of fitness. He creates workout plans and shares fitness tips as a trainer for the online edition of British GQ. He is also a columnist for Glamour UK. Bradley uses Instagram to share quick workout tips, so it’s worth tuning into his feed. He currently has 310,000 followers on the platform.

Better known as, “The Domestic Man,” Russ Crandall is a food blogger who runs a blog under the same name. He is also a New York Times bestselling author of books like, “Heritage Cookbook,” “The Ancestral Table,” and “Paleo Takeout.” While he shares full recipes on his blog, he uses Instagram to promote the recipes using photos of his delectable dishes. He currently has 44,300 followers on the platform. 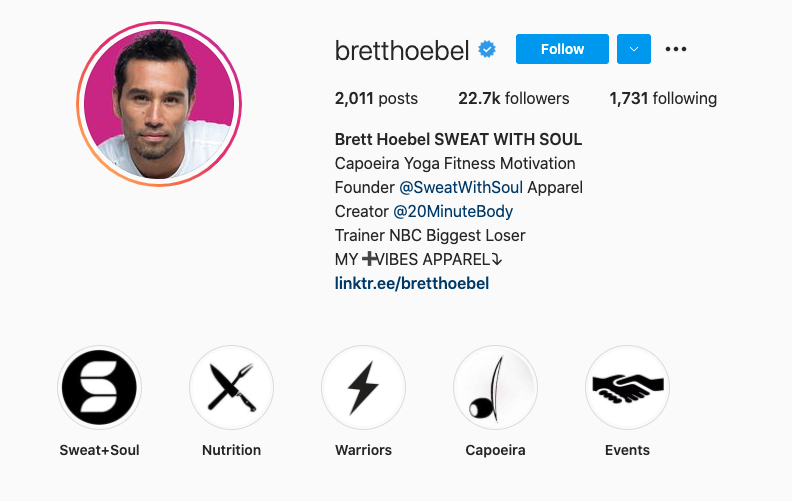 Brett Hoebel has made a name in the fitness industry not just as a trainer but as an entrepreneur. His claim to fame was his appearance as a trainer on NBC’s “Biggest Loser.” He also founded the Sweat With Soul clothing line and created the 20-Minute Body exercise routine. He has around 22,700 followers on Instagram, where he shares fitness tips and inspirational messages.

If you’ve ever heard of the Momofuku restaurant group, you’ve probably heard of the mastermind behind it all – David Chang. He is not only a formidable cook and successful restaurateur; he’s also a television personality and an author.

He uses his Instagram to share his personal life, food adventures, and behind-the-scenes shots at Momofuku. His fun and colourful personality, combined with his expertise in the food industry, have helped him garner 1.1 million followers on the platform.

Being a visual platform, Instagram provides an excellent opportunity for art influencers to grow their influence. Benny Or is one such influencer and he regularly posts enthralling photos of famous art pieces from around the world. This Canadian art enthusiast is currently based in New York City and has gained more than 10,900 followers. He has even been chosen as one of Artnet’s top 10 influencers.

Calvin Royal III is a dance influencer who has amassed 20,600 followers on Instagram. He is a soloist with the American Ballet Theatre and has modelled for famous brands like Tommy Hilfiger, Calvin Klein, etc. His elegant poses and dancer figure make him the perfect photography subject. He uses his Instagram to share beautiful shots of his dance moves and his modelling shots as well. 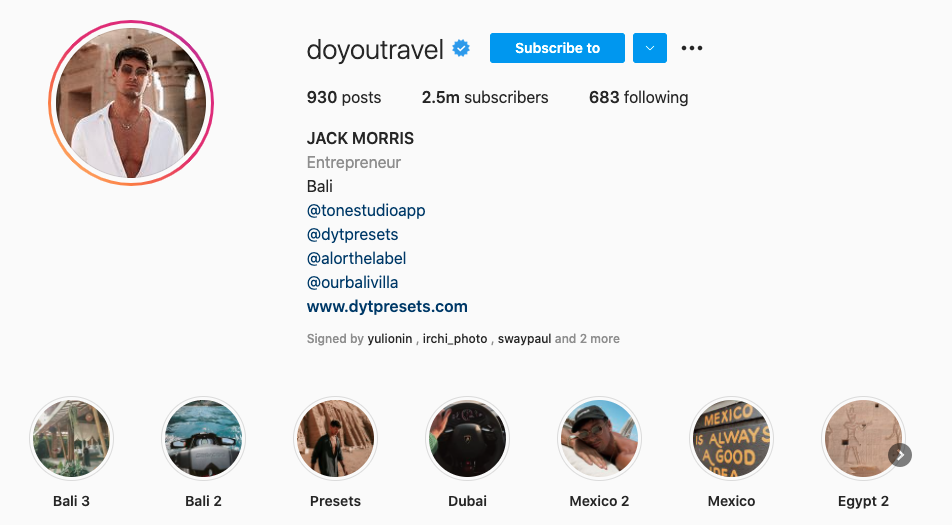 Next up is Jack Morris, a travel influencer whose Instagram feed is filled with breathtaking images of his travel destinations. His feed looks even more appealing because he edits his photos to maintain a consistent tone and style. He has been travelling around the world since 2012 and is currently based in Bali. He has managed to gain 2.7 million followers on Instagram.

Paul Octavious is a Jamaican photographer and art influencer based out of Chicago. He has built a name in the photography and art industry, and has managed to gain 566,000 followers on Instagram. He uses his Instagram to share interesting shots of still life and people, as well as his personal life. He also founded the Eye Eaters Society, a project that involves creating art-inspired food. 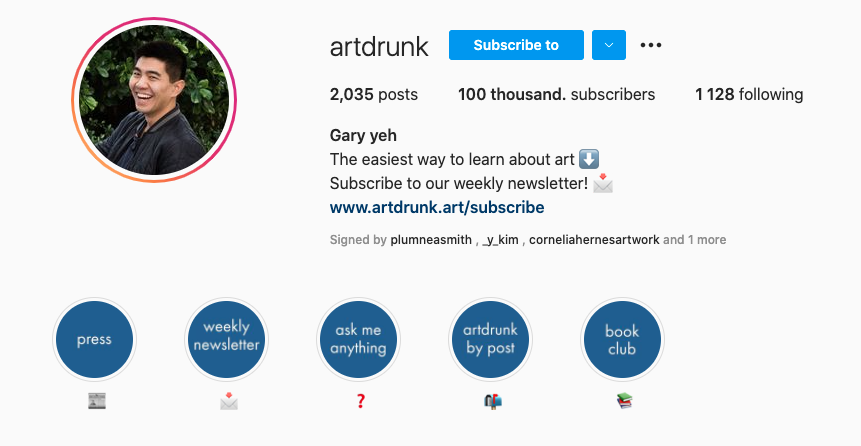 Another art influencer to grace this list, Gary Yeh is the founder of Art Drunk, a visual diary and blog where he details his adventures in art galleries around the world. He also works as a digital marketing consultant, helping art institutions build their digital presence. His Instagram feed is filled with stunning pictures of art installations and art pieces. As a result of his attractive feed, Gary has gained 87,300 followers on the platform.

Luke Hannon is a social media comedian who built his influence by creating memes and sharing them via his other account, @lukehannontv. He is known for his self-deprecating humour, which typically involves making fun of his height and his awkward experiences. He has gained almost 300,000 followers on his meme account, while his personal account has about 72,000 followers.

These are 24 male influencers on Instagram that you should follow in 2019. Some of them are known for their style, while others are known for their cooking expertise. Some even create art in the form of photography, and others capture their travel experiences through breathtaking images. While their content isn’t similar, they do have one thing in common – they all create high-quality content that’s worth following.