You are watching: 106 Social Media Acronyms and Abbreviations You Need to Know In Lisbdnet.com

106 Social Media Acronyms and Abbreviations You Need to Know:

Social media has its own language. Here’s the Rosetta Stone you need to decipher it.

Details, information. If you’ve got the 411, you know what’s going on. Comes from the old 4-1-1 information line in the US.

“As Far As I Know.” You might preface a statement with this to let folks know that what you’re saying might not be entirely accurate.

“Away From Keyboard.” Generally used in chat rooms to let folks know that you’re away from the action and won’t be responding.

“Am I The A**hole?” AITA gained popularity on Reddit with an AITA subreddit where people describe a situation to gauge public opinion about who was in the wrong. 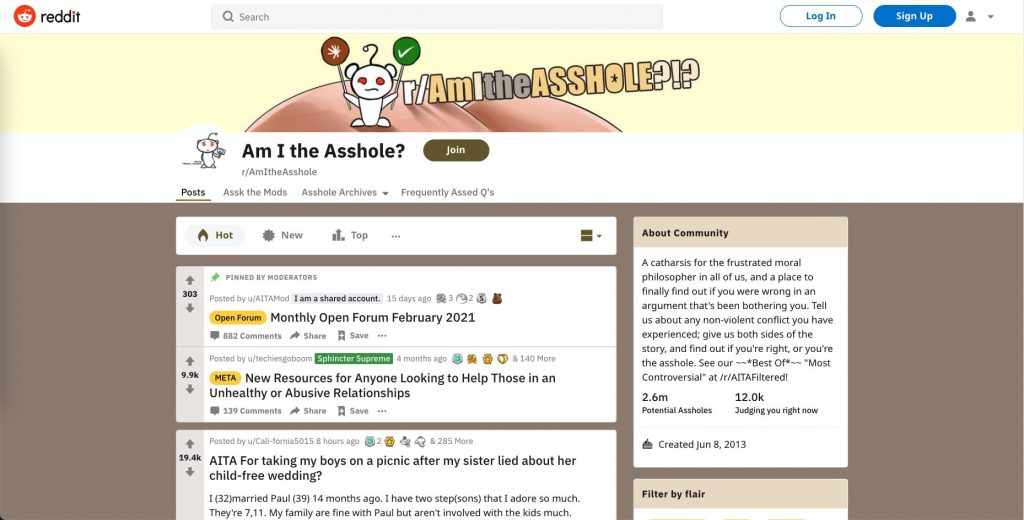 “Ask Me Anything.” Often used by celebrities and influencers as a way to connect with followers.

“At The Moment.” Could also be “Automatic Teller Machine,” but the context will tell you. Chances are if it’s on social media, it’s “at the moment.”

“Business to Business.” Companies that sell to other companies.

“Business to Consumer.” Companies that sell to consumers.

“Before Anyone Else.” Usually used to reference a significant other or close friend.

“Because.” Because typing out “because” takes up too much valuable space.

“Be Right Back.” Similar to AFK, this is used to let others know that you’re going to be away for a moment.

“Be That As It May.” Want a polite way to tell someone they’re not quite getting the whole picture about a situation? This is for you.

“Behind The Scenes.” This is typically used by influencers and brands to show what happens when they’re creating content that makes its way out for public consumption.

“By The Way.” A synonym for “incidentally.”

“Change My View.” This lets people know that you have an opinion that you know might not be based in truth and are open to having a conversation about it.

“Correction.” If you make a mistake in your post but it can’t be edited and you don’t want to delete it and start over.

“Direct Message.” Most social media platforms allow for private direct messages between users. You’ll see this a lot as a verb, i.e.—”DM me.”

“Did You Know?” When you’re about to drop facts, start with this (or hashtag it).

“Explain Like I’m Five.” This is a popular one on Reddit but has been expanding onto other social media platforms. Use this when you have no idea what people are talking about: “ELI5, the GameStop/Reddit investing thing.”

“Face to Face.” These days, you might get “in a pandemic?” in response.

“For F*ck’s Sake.” When you’re completely frustrated, annoyed, and/or exasperated by whatever’s going on.

“F*ck My Life.” Send an email complaining about your boss only to realize that you sent it TO your boss instead of your coworker? That’s an FML moment.

“Fear Of Missing Out.” A psychological phenomenon that results from missing out on an event, sale, or anything that it seems others are enjoying. Many marketers leverage FOMO to encourage people to sign up for email newsletters.

“Fixed That For You” or “Fixed It For You.” Often used to call out mistakes in a way that lets the person you’re correcting know that you need them to do better.

“For The Win.” Used for calling out success or gratitude.

“For What It’s Worth.” When you’re giving feedback or sharing information that may or may not be useful or needed.

“For Your Amusement” or “For Your Entertainment.” Use this when you’re sharing something that’s purely intended for the pleasure of your followers.

“For Your Information.” Sometimes meant sarcastically, but mostly used to signal that you’re sharing something useful.

“Greatest Of All Time.” This social media acronym is bestowed upon those who are the very best at what they do.

Any excuse to get this out😂 unbelievable night⚽️ #GOAT #ChampionsLeague pic.twitter.com/wTB59UMSuW

“Get The F*ck Out of Here.” Like GFY, this one is self-explanatory.

“Hit Me Up.” Used when you want someone to respond or as an invitation to start a conversation.

“Hat Tip.” When you want to credit someone else for finding that meme you just shared or congratulate someone on a job well done.

“Happy To Help.” A common reply to TY (thank you).

“I Am Not A Doctor.” If you’re offering anything that could be taken as medical advice and don’t want to get in trouble should it go wrong, use this social media acronym.

“In Case You Missed It.” Used to share news or posts that didn’t get a lot of attention but should have.

“In Case You Were Wondering.”

“If I Remember Correctly.” Use this when you want to share your insights but aren’t sure if the details are actually clear in your mind.

“In Real Life.” Used like F2F or when you want to stress that something happened in the actual world and not online.

“In Search Of.” Commonly used on sites where things are sold or traded.

Often used in forums and groups where things are solicited, sold, or exchanged.

“In My Opinion” or “In My Humble Opinion.” If you’re sharing something that might be met with criticism or skepticism, adding IMO will keep people from thinking that you’re trying to pass your beliefs off as facts.

“Just Kidding.” Used to indicate that whatever you said was a joke. More and more, it seems to be used as a way to insult someone without seeming like you really mean it: “You’re worthless. JK!”

“Just So You Know.” If you’re sharing information that someone probably needs to know, you’d probably use this.

“Just The Messenger.” This lets people know that you’re sharing information from someone else.

“Laughing My A** Off” or “Laughing My F*cking A** Off.” The correct response to something really, truly funny.

“Let Me Know.” This is an indication that you need a response.

“Like My Status.” Generally used with promotions or incentives to encourage engagement. Also used by regular social media users to get their followers to play a game: “LMS and I’ll let you know what animal you remind me of.”

“Laugh Out Loud.” Traditionally used when something is funny (adding the “Z” on the end makes the LOL sarcastic). Gen Z tends to use LOL to fill out a sentence that doesn’t seem long enough, regardless of whether or not something is funny: “I’m tired rn lol.” When they really find something funny, you’ll either get a string of random letters (“vbfjdfkdfkvjnxbkc”) or an emoji (😭 and 💀 are common).

“My Face When” or “My Reaction When.” Accompanied by an image or GIF that shows your face in a certain situation. Intended to be funny.

“Mind Your Own Business.”

“No Big Deal.” When you want to convey that something isn’t that serious… even if it is.

“Not Gonna Lie.” When you’re about to truthbomb the people, use this one.

“Not Safe For Work” or “Not Safe For Life.” If a post has one of these on it, it’s not meant for a work/professional environment. You’ll see NSFL on things that are deemed inappropriate at any time.

“Note To Self.” While it may seem that this would be used to remind yourself that you need to do something, it’s commonly used as a way of sharing something silly that you’ve done and hope to keep others from doing the same. Sort of like PSA, below.

“Original Content.” This is a way of letting people know that the amazing thing you’re sharing originated with you.

“Original Gangster.” Typically refers to someone who has started a trend.

“Overheard.” If you’re quoting something that you overheard somewhere, this is the social media acronym for you.

“Oh My God” or “Oh My Gosh.” Used to express surprise or amazement.

“Outfit Of The Day.” Used a lot by fashion influencers to show off the outfit they’re wearing that day.

“Original Poster.” Used when the reply is intended for or you’re referencing the person who started the conversation.

“Oh Really.” Tends to be a sarcastic reply to something.

“Pics Or It Didn’t Happen.” When you don’t believe what someone is telling you, you might say this.

“Public Service Announcement.” When you’re sharing useful information that can benefit everyone.

#PSA to start the week pic.twitter.com/s8so2KtE7x

A real-time mood, i.e. “So hungry RN.” You can also ask someone WYD RN? (Translation: What are you doing right now?)

“Safe For Work.” The opposite of NSFW content. This content could be safely viewed no matter where you are or whose company you’re in.

“Shaking My Head” or “Shaking My D*mn Head.” This is used when you’re disappointed about something or if you can’t believe that someone isn’t understanding something obvious.

“Shout Out.” Use this when you want to shout out (acknowledge) a customer, follower, business partner, or anyone.

“Shut The F*ck Up.” Another in the “self-explanatory” column.

“Throwback Thursday.” One of the older social media acronyms. Used to refer to an older post that you want to share again.

“That Feeling When.” Similar to MFW. Usually accompanied by an image or GIF.

tfw u think ur having a good day during panny and then u remember the panny https://t.co/UahNVI1tLs

“Today I Learned.” This is used when you just discovered something interesting that you think others should know.

“Too Long; Didn’t Read.” This can be used as a preface to a summary of longer content or as a response to the content to indicate that you didn’t actually read it.

From today’s talk: the TL;DR cartoon that sums everything up! Courtesy of @tomgauld #TLDR #attentionspans #Reading pic.twitter.com/pr3hegASkB

“Too Much Information.” When someone shares something you never needed to know about them, it’s TMI: “I didn’t make it to the toilet and now my underpants are ruined.” “Ew, TMI TMI!”

“Try To Keep Up.” For use when someone misses the joke or the point of the conversation.

“Woman Crush Wednesday.” Similar to MCM, this social media acronym is used to share about a woman you adore.

“What The F*ck.” When you legitimately are confused or annoyed by something.

“Your Mileage May Vary.” Used if you have advice to share about something that worked for you but you want people to know that it’s not a guarantee.

“You Only Live Once.” A social media acronym that typically accompanies an image, video, or GIF showing someone doing something stupid or courageous. Sometimes used by people to signify that they’re living their best lives.